Rinjani trekking via Senaru village is the most popular for climbing to Mount Rinjani to see the beauty of its crater.

See the peaks and volcanoes with the most perfect visibility from the Senaru crater. The beginning of the climb from Senaru village will be enough to spoil climbers because the forest is shady and shady until post 3

AT A GLANCE ABOUT MOUNTAIN RINJANI

If you are a true climber, surely you will know Mount Rinjani, the most beautiful mountain in Indonesia, so do not miss it, let us know more closely. 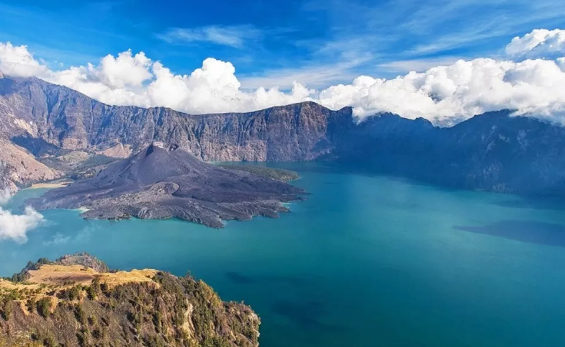 Come visit Mount Rinjani, get the best experience and the most beautiful in your climbing experience.

If you want to climb Mount Rinjani you can do it through some access to the climb, including access to enter; Senaru Village, Torean Village, Sembalun Lawang Village, Sajang Village, Tetebatu Village and Aik Berik Village (North Batukliang)

In general, most climbers do climbing through access to the village of Senaru or Sembalun Lawang village.

Especially for climbers who just want to conquer the peak of Rinjani whose height is 3,726 m above sea level, the closest access is through Sembalun Lawang.

Previously it was already there but it was not as noisy as the Senaru and Sembalun hiking routes which were geographically located in the districts of North Lombok (Senaru) and East Lombok regency (Sembalun).

It seems that Central Lombok Regency also does not want to be a constant audience, so this plan will be endeavored with an innovative concept, by planning road construction or opening new lines.

So that climbers can drive as close as possible to the mouth of the crater Segara Anak as much as possible, because this is part of the alternative for those who are physically no longer able to climb the terrain such as the Senaru and Sembalun lanes.

Sembalun is the closest access to the trip to the summit. because it means you will start climbing from a height of 1,156 m above sea level.

While climbing through the village access “Senaru” starts from an altitude of 601 m above sea level.

Mount Rinjani has erupted several times and the volcano experts think that Mount Rinjani before erupting was estimated to be about 5,000 meters cone shaped, but after two large eruptions this mountain formed a crater in the middle of the eruption.

As it resembles a bowl, it accommodates rainwater in its crater located in the middle of a rainwater lake called ‘Segara Anak’ lake which is at the elevation level of 2008 m above sea level which has an overflow in the north.

Overflowing water from Segara Anak lake forms a small river, the water is white until the local people give the name Kali this time as “kokok Putek.”

In the sasak language, which means white river, where the flow of water originating from the overflow of Segara Lake, the child has many waterfalls in its flow.

Among them are several popular ones to visit, namely: Mangku Sakti Waterfall and Mayung Putek Waterfall (white deer) and Umar Maya waterfall.

Mount Rinjani National Park began to be developed into a tourism industry since 1999 and was followed by the establishment of an RTMB institution (Rinjani Trekking Management Board) which trained and educated all components involved in organizing mount Rinjani climbing.

Mount Rinjani erupted for the umpteenth time in 2004, due to this eruption there was no effect caused only by a small thump that was heard up to the city of Mataram and centered on volcanic cones which were confined by the walls of a high-thick crater.

The last time it erupted on November 3, 2015 for 2 weeks which resulted in disrupted flight traffic.

It is ironic that those who live around the slopes of Mount Rinjani have no effect at all from the rain of dust, only those who most clearly hear every boom when an eruption occurs. 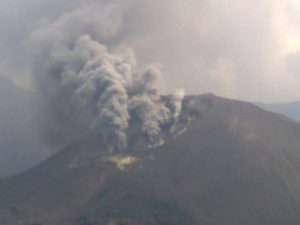 Including the climbers of Mount Rinjani business, which is certainly also the tourists who have already paid a down payment for hotel accommodation located in Lombok.

The Gunung Rinjani area is part of a national park consisting of 40 national parks located in the archipelago covering an area of ​​41,330 ha and also incorporated in a protected forest with an area of ​​66,000 ha.

Forest and animal conservation contained in it is protected by the state, around the slopes of Mount Rinjani there are 20 traditional villages surrounding it.

The crater of Mount Rinjani was formed so beautifully that many mountain lovers came to visit it, besides seeing the enchanting nature of the climbers, they could also do fishing on the Segara Anak lake.

These fish used to come from seeds sown by the second president of the Republic of Indonesia, President Suharto.

Until now the breed has become large sizes, especially tilapia fish, climbers as they please can fish on this lake, but according to information from the anglers of the fish found on this lake.

Slightly different compared to fish commonly found in fresh water which are below, these fish have a slightly larger head, perhaps due to lack of food intake until the fish found on the lake are very hungry.

Anglers are very easy to get and certainly these fish when cooked or when served a little smell of sulfur. 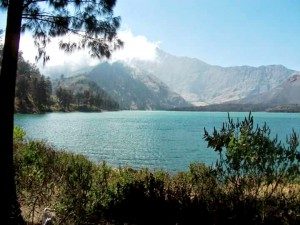 This lake is called the Segara Anak lake by Lombok people, it can be guessed from the name of this lake that the one who gives the name is a local person (Lombok people)

In ancient times, Lombok people when they saw water that was as large as it was when they saw the ocean they called it “fresh” as well as Segara Anak lake whose water resembles a small ocean.

Likewise, the volcanic cone has an elevation of 2,351 m above sea level which is on the edge of the lake, which is named Gunung Baru Jari or Gunung Baru. So, because Lombok people used to think the volcanic cone was a new or emerging mountain without them knowing it is a geological effect.

It is caused by the pressure of magma which pushes the surface of the earth to form like a cone, without ever knowing that the crater was a former eruption that was very powerful, in general 20 years ago Indonesian people had known Mount Rinjani through pictures on paper money worth Rp 10.000

This organization empowers local residents to be involved in enjoying the blessings of the beauty of the Mount Rinjani National Park that God gave, which is very good working as an organizer, tour guide and porter around the villages of Senaru and Sembalun.

They are trained (porters and guides) on how to treat tourists during the climb of Mount Rinjani, especially how to cook, making European-style dishes.

Most climbers are also (foreign nationals) the perpetrators of mount Rinjani climbing tours are trained in ways of saving actions, preserving the environment and the surrounding environment, especially maintaining the cleanliness of Mount Rinjani from garbage, especially plastic waste. 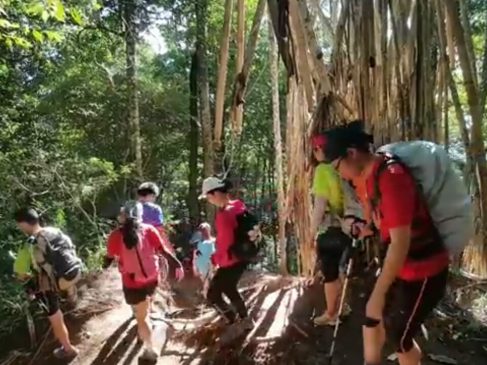 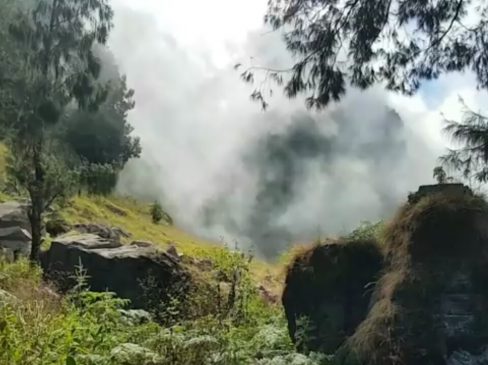 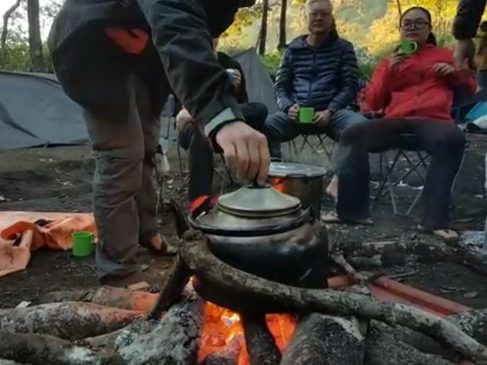 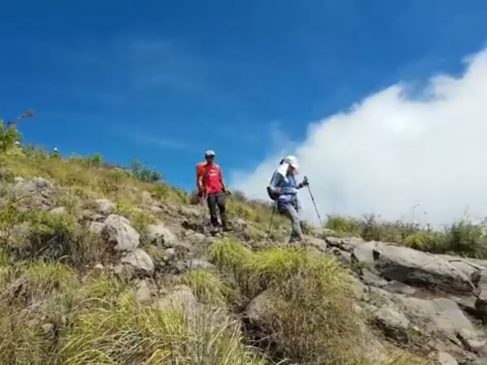 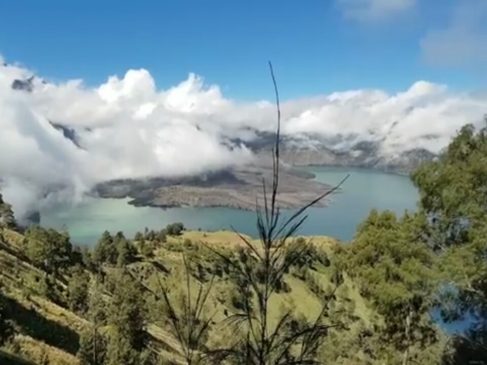 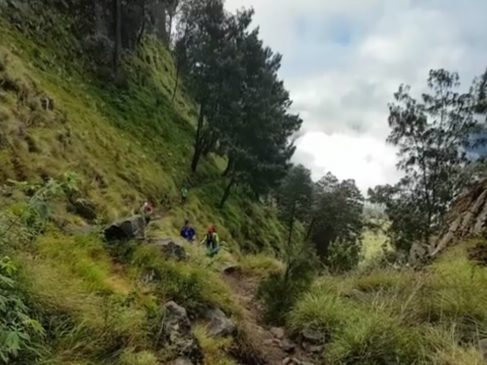 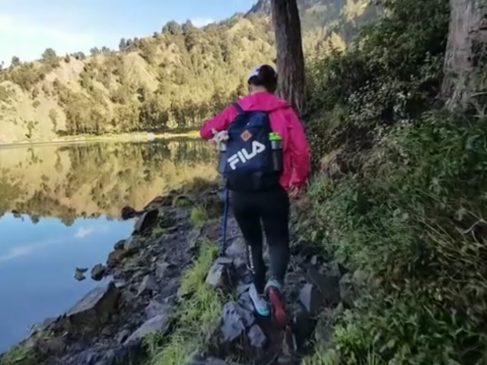